Explore amazing Russian history and culture travelling to two Russian capitals in two short days. Founded in 1703 by Tsar Peter the Great, St. Petersburg remains the most European city in Russia and Russia’s cultural capital. The architectural look of the city was created while St. Petersburg was the capital of the Russian Empire. St Petersburg is often called the” Venice of the North” because of its location on 101 islands in the Neva River. The largest city of the European continent with the population of more than 13 million residents, Moscow is a fascinating city to wander around, stunning cathedrals, churches, and palaces lie side-by-side with bleak grey monuments and remains from the Soviet state. Moscow remains open, hospitable and festive, and has the right, as ever, to be called the heart of Russia. 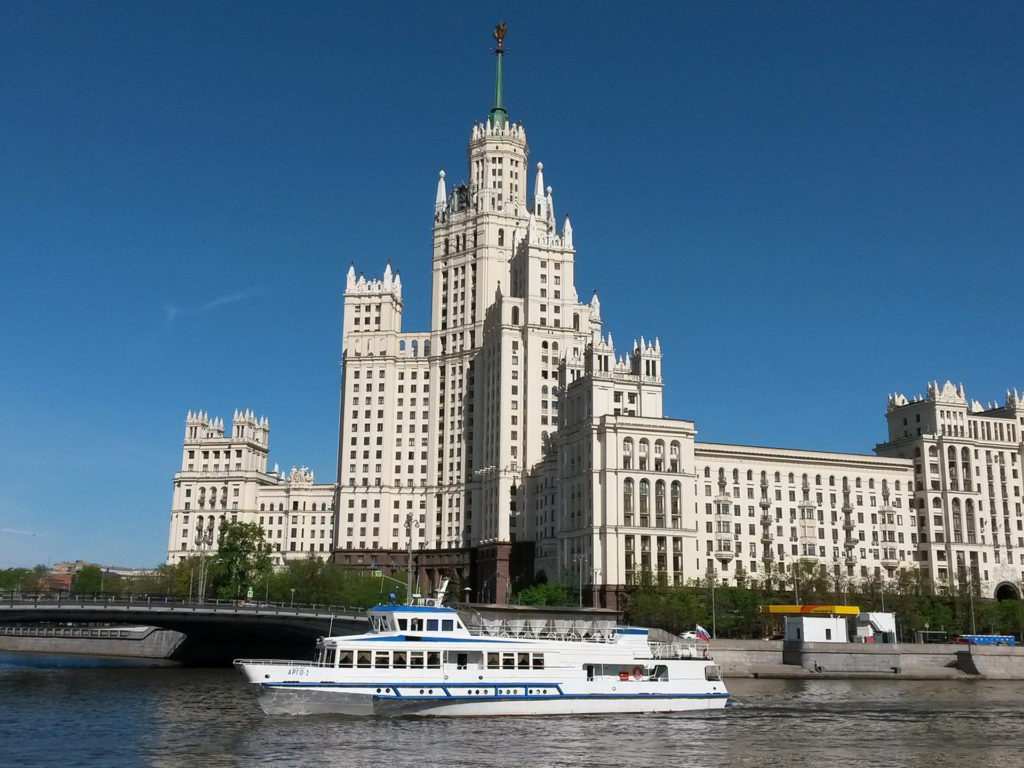 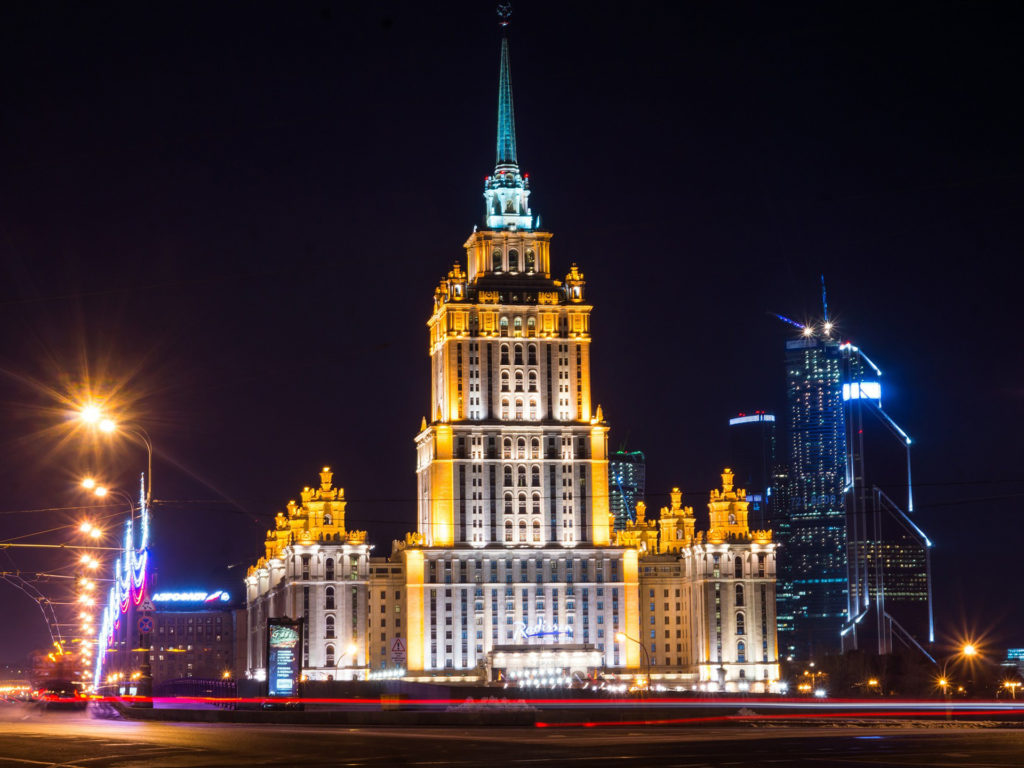 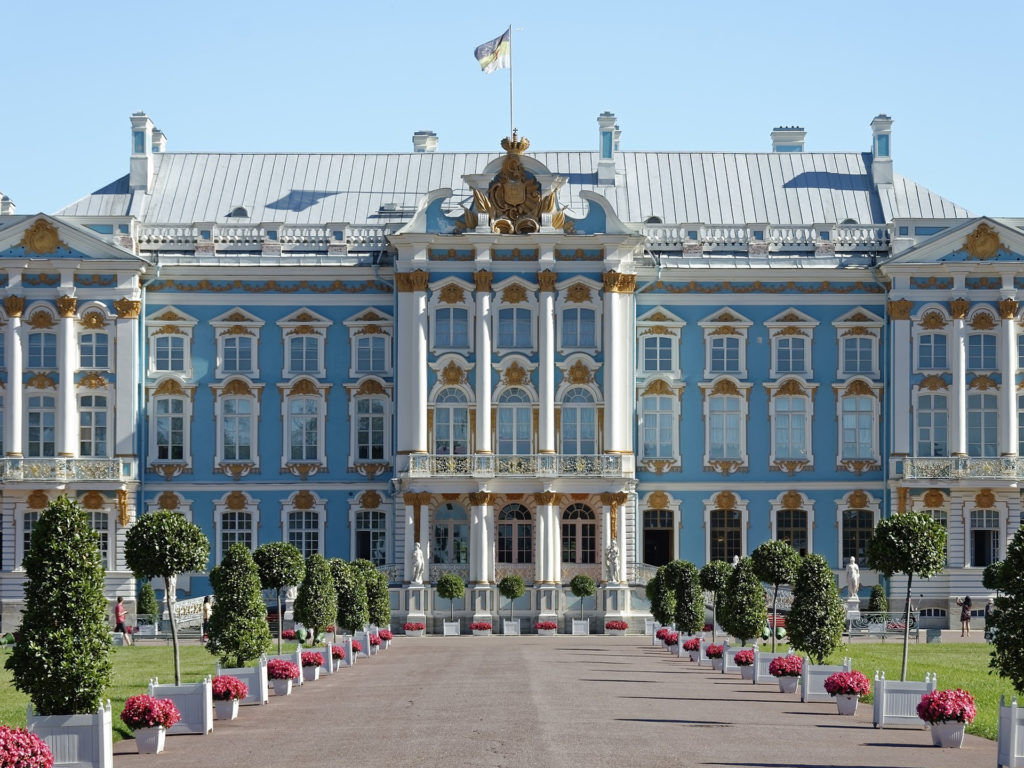 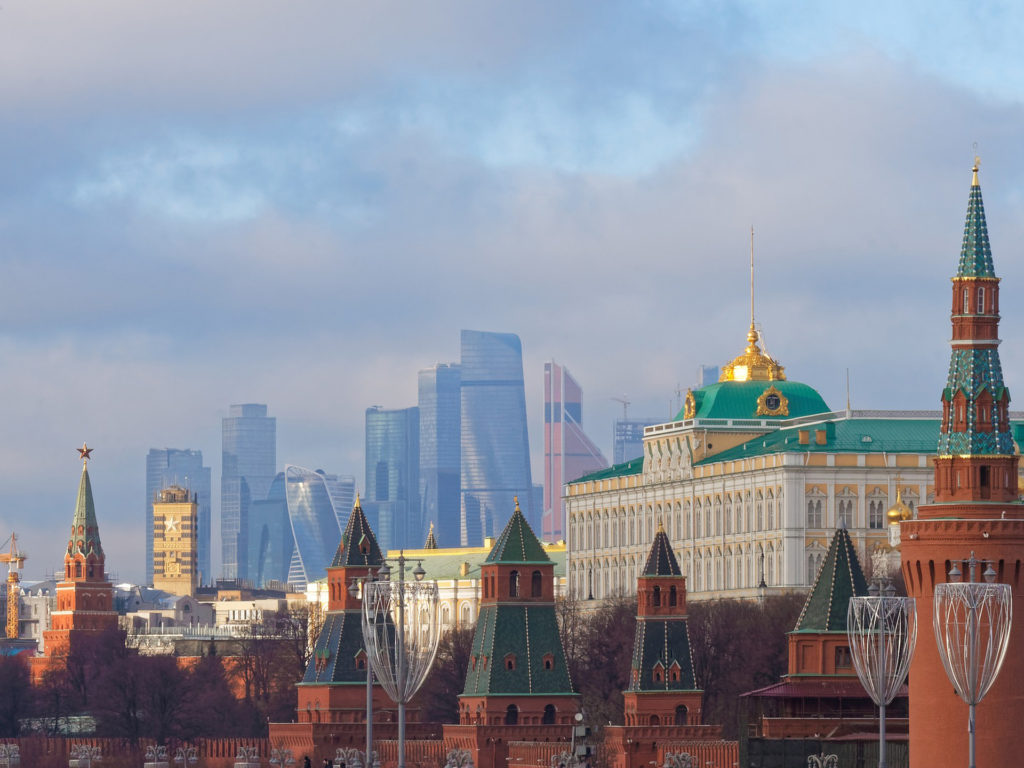 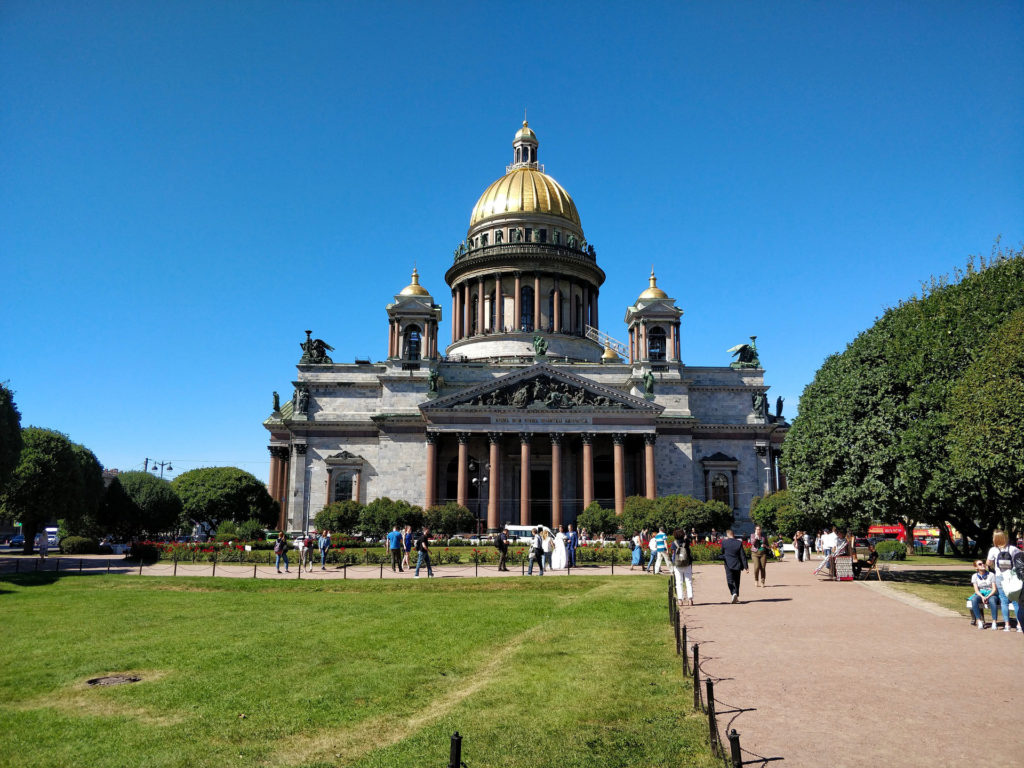 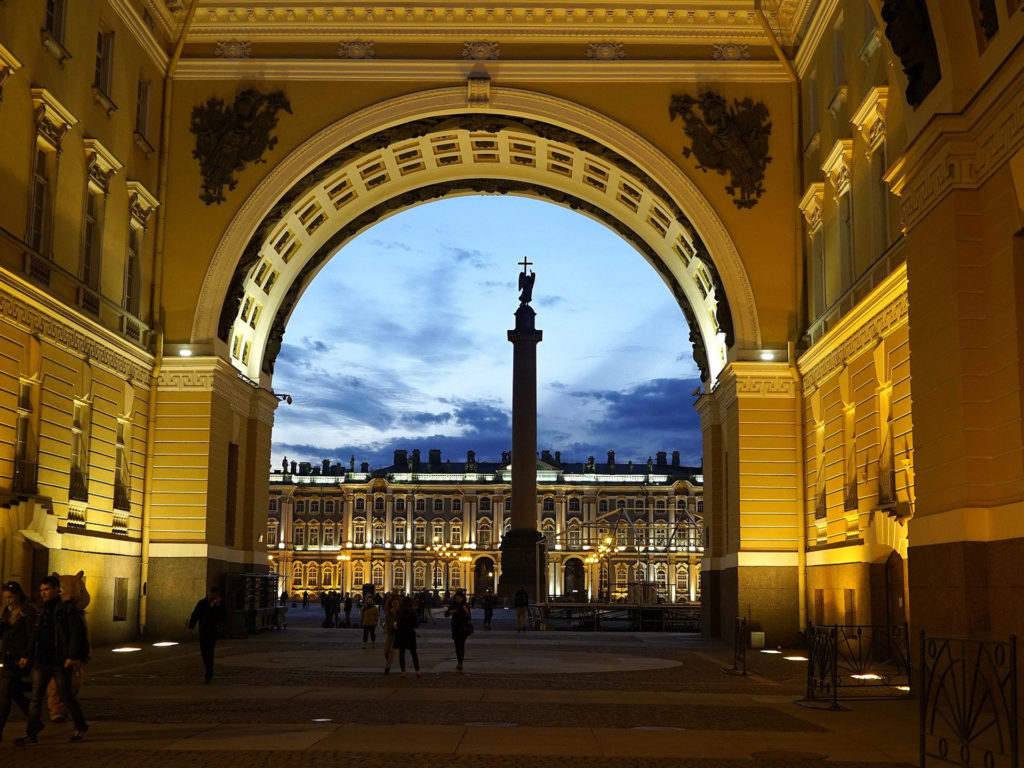 The heart of the Northern Capital, the Palace Square is one of the most magnificent architectural ensembles in the world. The square got its name after the Winter Palace, which was built by the architect F. Rastrelli in the middle of 18th century. In 1819-1829 a neoclassicist architect of Italian descent C. Rossi developed a project of a single architectural ensemble, glorifying the victory of Russian arms in the War of 1812. The Palace square is a witness of the most important historical events in the history of Russia, such as Bloody Sunday in 1905 and October Revolution of 1917.

One of the world’s most famous palace-park ensembles, Peterhof was constructed in accordance with the wish of Peter the Great to create a summer residence which would be as luxurious as the French palace of Versailles. Peterhof has one of the world’s largest fountain systems – 147 active fountains. The overall concept of parks and palaces planning was developed by Peter the Great himself. Nowadays, the entire palace ensemble of Peterhof includes Great Peterhof Palace, Marly Palace, Monplaisir Palace, Upper and Lower parks, and numerous architectural elements: cascades, fountains, marble sculptures.

1764 is considered as the date of the foundation of the Hermitage. At that time the Empress Catherine the Great purchased a large collection of foreign artists’ masterpieces. She founded a small museum, where she used to spend many hours in seclusion. She called it Hermitage (the French word ‘Ermitage’ means ‘a place of solitude’). Today the complex of the State Hermitage includes six buildings, five buildings are open to the public. Their halls contain museum displays with a total number of over three million exhibits.

The world-famous Kremlin is located in the heart of Moscow, right adjacent to Red Square, and serves as the presidential residence. The word “Kremlin” means “fortress inside a city”, and in fact, the Moscow Kremlin is a medieval fortified complex rising above the Moskva River on Borovitsky Hill. This citadel of domed cathedrals and palaces, which dates to 1156 but occupies a site much longer, was the religious center of the Russian Orthodox Church and the residence of the tsars. The Kremlin includes six palaces, eight cathedrals and churches, and massive red brick walls with twenty Kremlin Towers.

Red Square has always been the main square of the city, and its history starts in 1490s when a new red brick Kremlin was built in Moscow. The old Russian word for ‘beautiful’ and ‘red’ was the same; so Red Square means “beautiful square”. Standing in Red Square, you can see the most significant buildings of the Russian capital: the Kremlin, GUM department store, the State History Museum, Lenin’s Mausoleum and of course, St Basil’s Cathedral. For centuries the cobbled space by the Kremlin walls has witnessed parades, execution, markets – and nowadays a popular New Year ice skating rink.

The Metro began operating in Moscow in 1935 with a single 11 km line connecting just thirteen stations, but it has since grown into the world’s fourth busiest transit system, spanning more than 300 kilometers and offering over 230 stops along the way. The Moscow metro remains the most reliable form of transport in the city, and more besides: many major stations were constructed as luxurious “palaces for the people”. In recent years Moscow metro system has been rapidly growing, a few new lines are being constructed, while some existing lines are almost doubled in length.

Arrive to St. Petersburg, meet and greet by your guide. On the way to Moskovsky railway station you will visit one of the most beautiful and harmonious ensembles of architecture in the world. The Palace Square remains the main public space of St. Petersburg after nearly three centuries. At the center of Palace Square stands the Alexander Column, constructed of a single piece of red granite and erected in 1834 in honor of Russia’s victory over Napoleon. In the background is the General Staff Building, this monumental neoclassical building was designed by Carlo Rossi in the Empire style and built in 1819-1829. The most beautiful building in the Palace Square is the Winter Palace. The majestic pale green and white building of the Winter Palace takes up 9 hectares of land and contains approximately fifteen hundred rooms. We will make a stop to enjoy and to capture the magnificent beauty of the Palace Square.

High-speed train from St. Petersburg to Moscow, the trip from Moscow to St. Petersburg takes less than 4 hours. Sit back, enjoy coffee and magical Russian countryside landscapes along 650 kilometers ride, and you arrive in Moscow.

A city tour of Moscow will take you around the city’s centre as well as to Vorobyovy Hills for an overlook at the metropolis. This is the best way to know the city and learn about the history of the Russian capital. On our way we will make several photo stops; one of them is the stunning view of the Kremlin from the embankment of St. Sofia, visit the famous pedestrian street Arbat, see the Seven Sisters, skyscrapers designed in the Stalinist style and the gold plated domes of Novodevichy convent.

Continue sightseeing in Moscow with a visit to the Kremlin (residence of Tsars and Patriarchs), Armoury Museum with unique collection of gold, silver and jewelry, beautifully decorated royal carriages and unique religious artefacts. You will see the famous Kremlin highlights created by Russian medieval craftsmen Tsar Bell and Tsar Cannon, which weigh over 240 tons together, and visit several of the Kremlin’s cathedrals. Climb the observation deck of Ivan the Great Bell and watch a changing of the Honor guard near the Eternal flame in the Alexander Garden, the place where Russians come to remember their family, friends and companion-soldiers who lost their lives in the most brutal war of the 20th century.

After the Kremlin tour take a stroll in one of the largest squares in the world, the Red Square, which is situated next to the walls of the ancient Kremlin. We will visit one of the Moscow’s symbols, the spectacular St. Basil’s Cathedral commissioned by Ivan the Terrible in the 16th century to commemorate a military victory, explore the famous GUM department store and make a wish at the beginning of all Russian roads at Kilometer Zero.

Enjoy a traditional Russian lunch at the local restaurant.

The Moscow Metropolitan is considered one of the most beautiful rapid transit systems in the world. Each of its 230 stations has a unique design and many station interiors are stunning architectural masterpieces. After a tour of the most beautiful and richly decorated stations you will be delivered to the Leningradsky railway station to take the high-speed train back to St. Petersburg.

During the city tour you will see all major sights of St. Petersburg: the main street of the city — Nevsky prospect, the beautiful Arts Square, St. Isaac’s Cathedral, the Church of the Savior on Spilt Blood, Mariinsky Theatre and the Bronze Horseman.

The architectural appearance of the city designed while Saint Petersburg was the capital of Russian Empire. In the earlier part of the 18th century, when native Russian architects were few, it was mostly foreign-born architects who built the city. Thus, the Swiss Domenico Trezzini, the Italians Gaetano Chiaveri and Mario Fontana, the Frenchman Jean-Baptiste Le Blond and the German Johann Schulter, who found a second homeland in Russia. Let’s continue our tour to the unique historical and architectural monument of Saint Petersburg – Peter and Paul Fortress located on Zayachiy Island. Built to protect the city from enemies, the fortress has never been used for the intended purpose. The dominant of the fortress is the first cathedral of the city — St. Peter and Paul Cathedral. The multitier belfry 122,5 meters height with its gilded spire crowned with and angel figure towers over the cathedral. After the interment of Peter the Great the cathedral became the imperial vault.

We will visit one of the largest museums in the world – the State Hermitage museum. In the museum you can see masterpieces of Leonardo Da Vinci, Rafael, Tiziano, Rembrandt, Matisse and Picasso. The State Hermitage also hosts the world’s best collection of Holland baroque, French paintings, a unique gold of the Scythes exhibition, and ancient Greek jewellery.

We will go to one of the most luxurious summer residences of Russian Emperors, and a symbol of Russia’s conquest of access to the Baltic Sea, Peterhof. Town of parks, palaces and fountains, Peterhof was founded by Peter the Great in the beginning of the 18th century to commemorate the glory of Russia after the victory over the Swedes at Poltava. Peterhof has one of the world’s largest fountain systems – 147 active fountains. Together with a few other monuments of Saint-Petersburg, Peterhof forms a unified UNESCO World Heritage Site. We are met by a view of the Upper Garden taking up an area of 15 hectares. It was lain out in the first years of the construction and for a long time it remained a kitchen garden. In the second half of the 18th century the Upper Garden became a regular park, and breathtakingly beautiful fountains began to appear in it.

The centerpiece of the whole ensemble is the Grand Palace – Russian emperors’ crown residence. The splendour of the Grand Palace interiors keep attracting visitors both in previous centuries and nowadays. After visiting the Grand Palace, we will go out on the terrace overlooking the panorama of the Grand Cascade – the gem of the superb Peterhof fountain system. The Cascade is unique in size, abundance of water, richness of the sculptural adornments.

Return to St. Petersburg. Our tour is over.