St. Petersburg is believed to be one of the most beautiful cities in the world. Founded in 1703 by Peter the Great, as a city around the little fortress and shipyard, St. Petersburg remains the cultural capital and the second largest metropolis of Russia. The architectural look of the city was created while St. Petersburg was the capital of the Russian Empire. First named St. Petersburg in honor of St. Peter, guardian of the gates of Heaven, the city on Neva river changed its name three times in the XX century. The city was renamed Petrograd during World War I, then after the death of Vladimir Lenin in 1924, Petrograd became Leningrad. The historical name was returned to St. Petersburg in 1991.

This tour gives you an opportunity to explore Peter the Great’s creation and trace its history back more than 300 years. 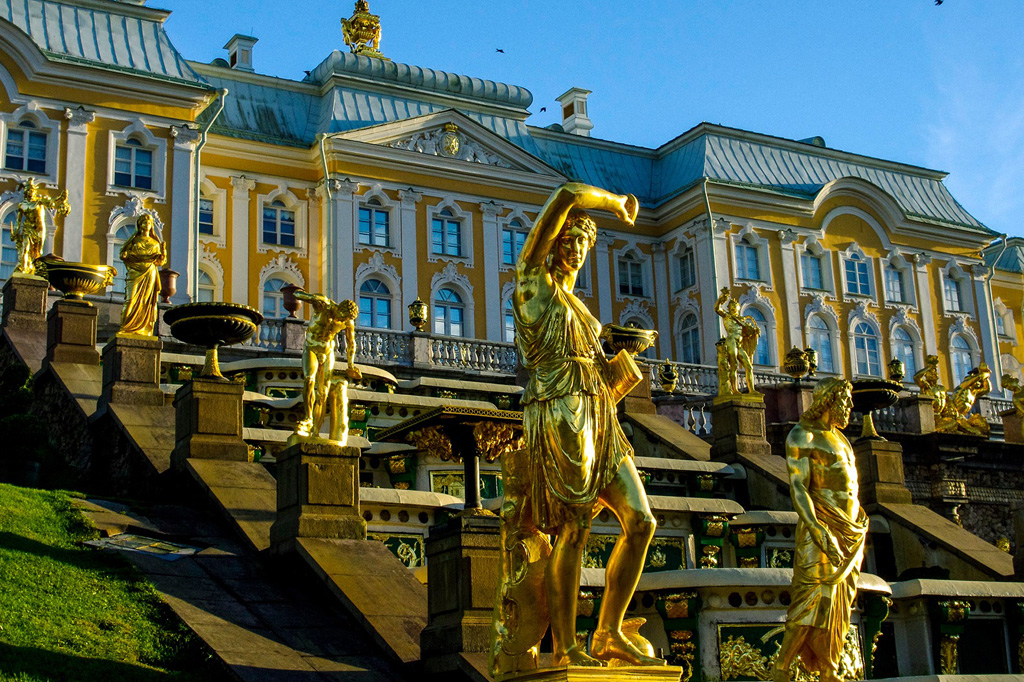 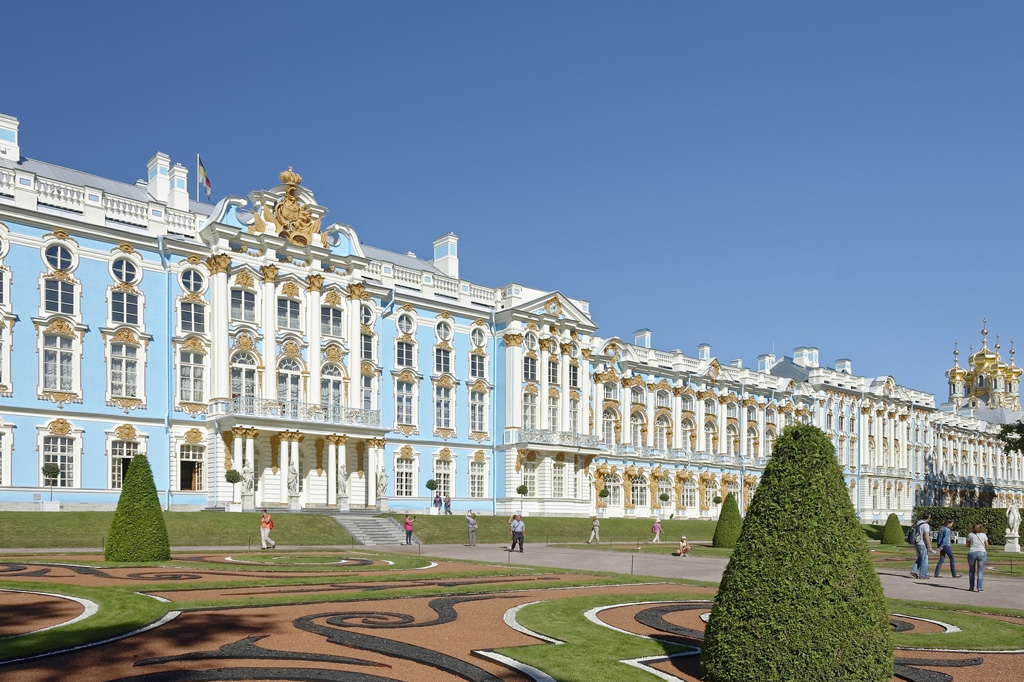 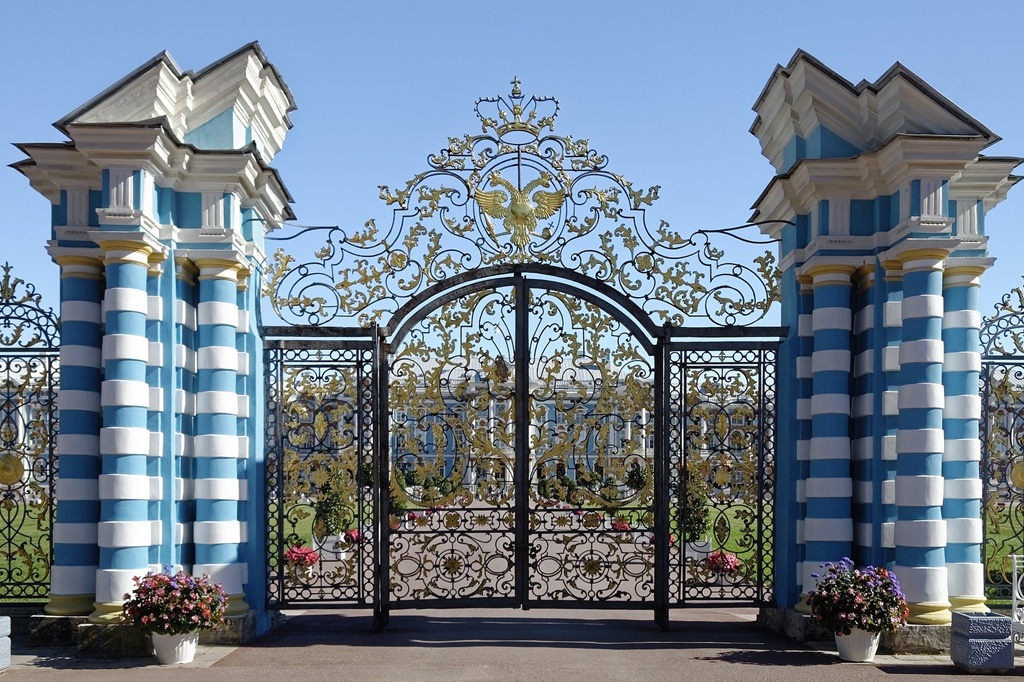 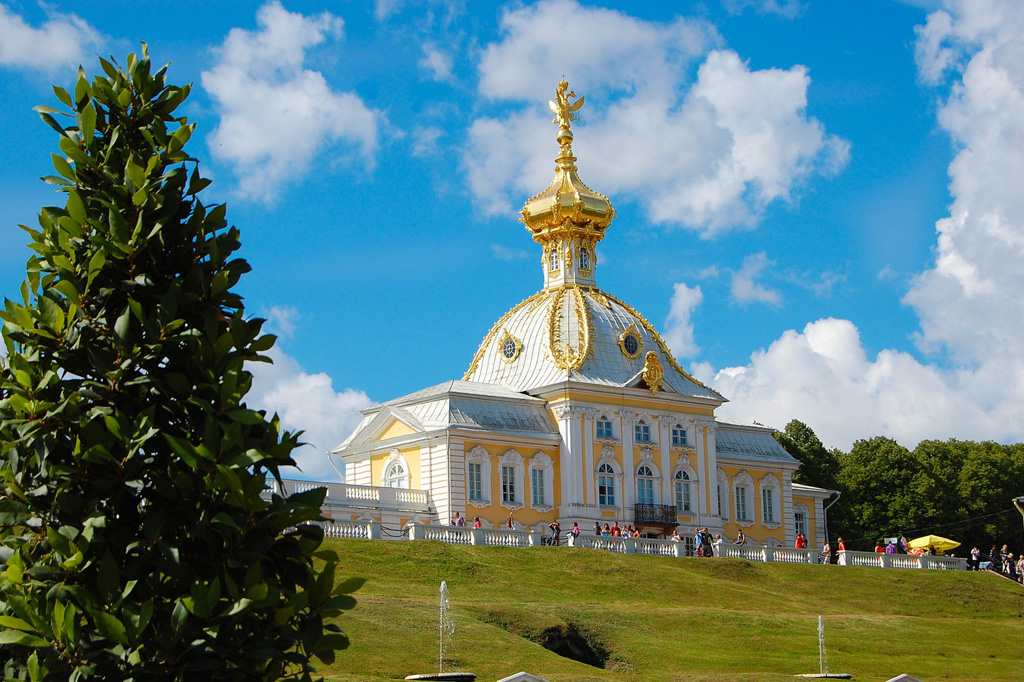 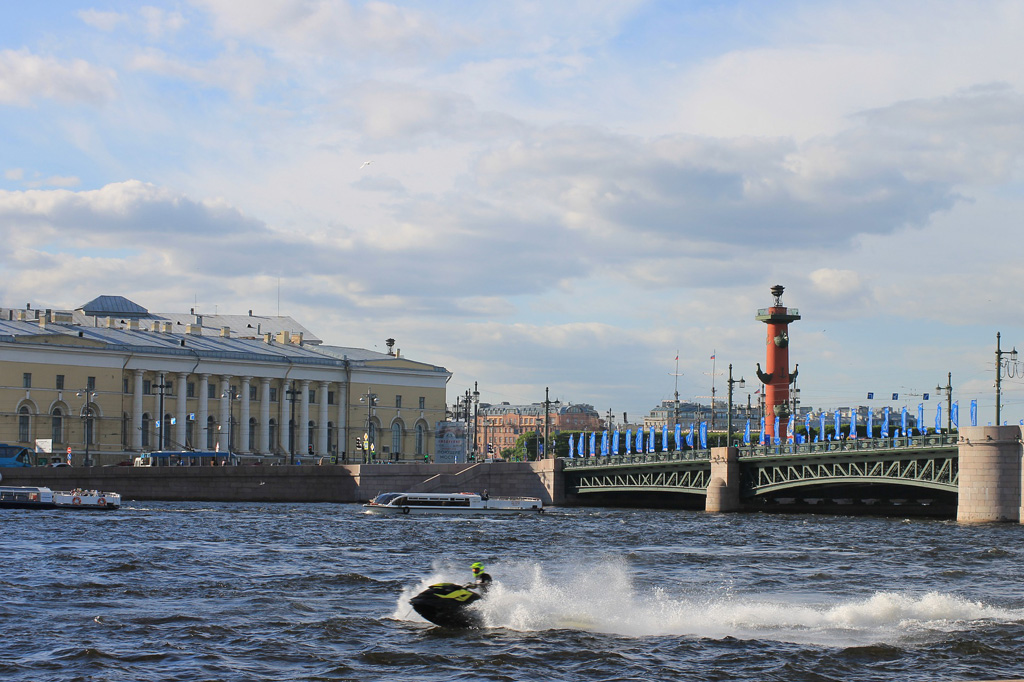 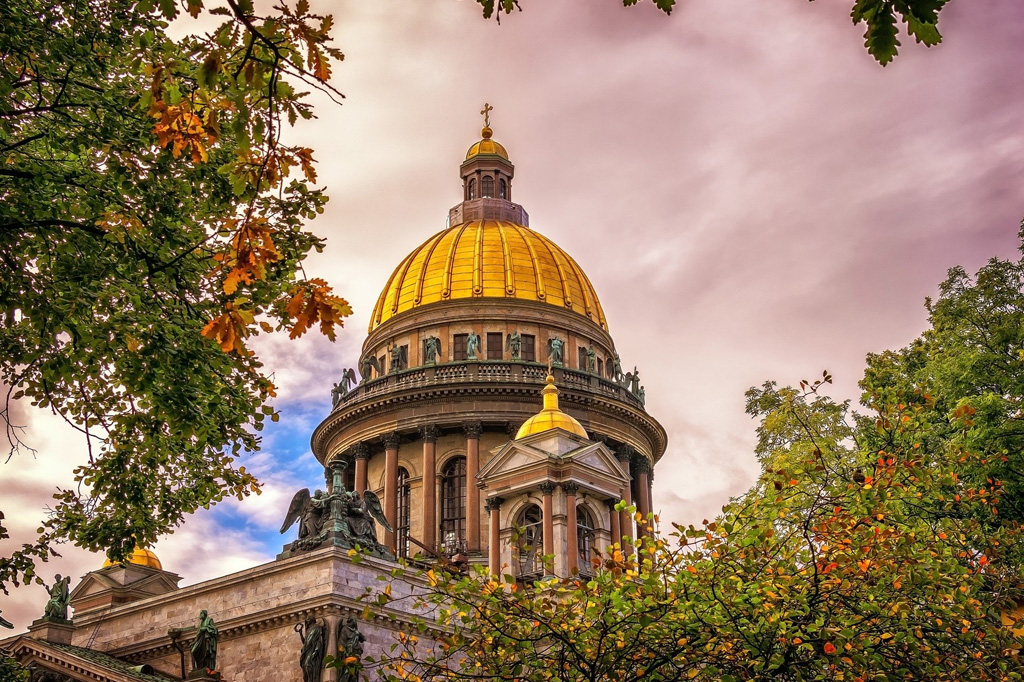 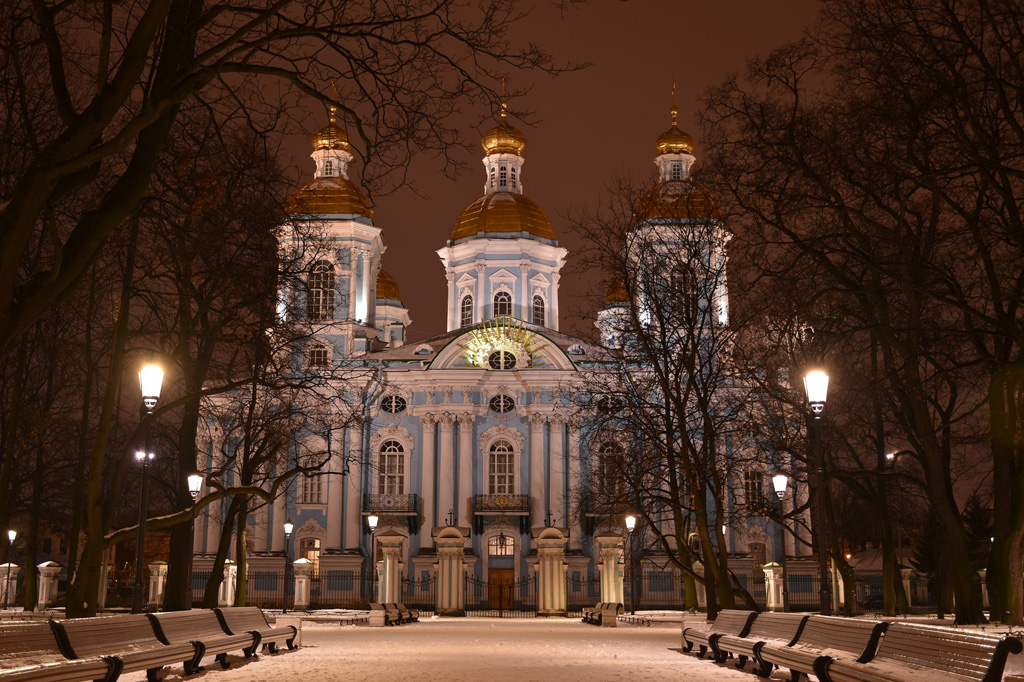 The heart of the Northern Capital, the Palace Square is one of the most magnificent architectural ensembles in the world. The square got its name after the Winter Palace, which was built by the architect F. Rastrelli in the middle of 18th century. In 1819-1829 a neoclassicist architect of Italian descent C. Rossi developed a project of a single architectural ensemble, glorifying the victory of Russian arms in the War of 1812. The Palace square is a witness of the most important historical events in the history of Russia, such as Bloody Sunday in 1905 and October Revolution of 1917.

The Church of the Savior on Spilled Blood

The church was built between 1883 and 1907 on the very spot where on March 1, 1881 the Russian Emperor Alexander II was mortally wounded by a bomb thrown at him. The Savior on Spilled Blood has a similar architectural style to that of the St Basil’s Cathedral in Moscow. Both the interior and exterior of the church is decorated with incredibly detailed mosaics, designed and created by the most prominent Russian artists of the day (V. Vasnetsov, M. Nesterov and M. Vrubel).

The Fortress was laid on a small island on May 16,1703, during the Northern war. This day is recognized as the day when St. Petersburg was founded. The Fortress consists of six bastions, connected with curtain walls, two ravelins and a crownwork. Peter the Great supervised the construction along with his confidants. Built to protect the city from enemies, the Fortress has never been used for intended purpose. For a long time, the Fortress served as a political prison for state prisoners and revolutionaries. In 1924 it became a museum.

Senate Square is one of the oldest squares in St. Petersburg and the most significant one in the history of Russia: here, the Decembrist Revolt took place in 1825. The square ensemble started to be developed in the early 18th century as a space in front of the Admiralty. When the Senate moved here from the Twelve Colleges Building, this place became known as the Senate Square, which became part of the Alexander Garden in 1874. The unique ensemble of Senate Square comprises a panoramic view of the Bolshaya Neva river, the Alexander Garden, the magnificent building of the Senate and Synod, St. Isaac’s Cathedral, and the Admiralty.

1764 is considered as the date of the foundation of the Hermitage. At that time the Empress Catherine the Great purchased a large collection of foreign artists’ masterpieces. She founded a small museum, where she used to spend many hours in seclusion. She called it Hermitage (the French word ‘Ermitage’ means ‘a place of solitude’). Today the complex of the State Hermitage includes six buildings, five of them are open to the public: the Winter Palace, the Small Hermitage, the Old Hermitage, the Hermitage Theatre, and the New Hermitage. Their halls contain museum displays with a total number of exhibits of over three million.

St. Isaac’s is the fourth largest cathedral in the world following St Peter’s in Rome, St Paul’s in London and Santa Maria del Fiore in Florence; and the major Orthodox basilica in Russia. Its construction lasted 40 years from 1818 to 1858 under the architect A. de Montferrand’s project. St. Isaac’s gilded dome dominates the city skyline and can be seen even far out into the Gulf of Finland. Dimensions of the building are impressive even if you admire it from a distance; the cathedral has 101.5 m in height, diameter of the dome is 26 m, and the massive granite columns weigh 114 tons each.

The Bronze Horseman, an impressive equestrian statue of Peter the Great, stands in the centre of Senate Square. The monument was built by order of the Empress Catherine the Great as a tribute to her famous predecessor on the Russian throne, Peter the Great. According to a 19th century legend, enemy forces will never take St. Petersburg while the “Bronze Horseman” stands in the middle of the city. During the Second World War the statue was not taken down but was protected with sandbags and a wooden shelter. In that way, the monument survived the 900-day Siege of Leningrad virtually untouched.

The construction of the summer ceremonial imperial residence started in the 1710 and lasted for over 10 years. The entire palace complex of Tsarskoye Selo includes the Catherine Palace, the Catherine park, the Alexander Palace, the Alexander park and numerous pavilions, monuments, bridges and other structures. After the 1917 Revolution the palace and park ensemble were converted into a museum, and the authorities gave the town’s best buildings to educational and health care facilities for children. In January 1983 the palaces and parks of the town of Pushkin were conferred the status of the State Museum-Preserve.

Peterhof was constructed in accordance with the wish of Peter the Great to create a summer residence which would be as luxurious as the French palace of Versailles. The first fountains were launched in 1721, during Peter the Great rule. In 1735 the Samson fountain appeared. Later, the great architect F. B. Rastrelli created his famous statuary. The Higher and Lower Grottos make up the centre of the fountain complex. They were constructed in 1720 in accordance with the idea of Peter the Great. The Grottos amaze with their domes, decorated with marble and gold-plated sculptures.

You’ll be met and transferred to the hotel. Accommodation at the hotel. On the first day you will take a sightseeing tour which includes major St. Petersburg’s sites.

We are heading along Nevsky prospect towards the Palace Square. The main street of the city, Nevsky prospect starts from the Admiralty and ends at the Alexander Nevsky Monastery. In the centre of the Palace Square you can see the Alexander Column, the monument devoted to Russia’s victory in the Patriotic War of 1812. The column, 47,5 m in height and 600 tons in weight, doesn’t fall due to precise calculations. The real jewel of the Palace square is the Winter Palace, the official residence of the Russian Emperors from 1732 to 1917. This majestic pale green and white building takes up 9 hectares of land and contains approximately five hundred rooms.

Let us notice the Admiralty building, one of the best-known and most beautiful architectural landmarks of St. Petersburg. The construction of the main Russian shipbuilding yard on the Baltic Sea began in 1704. The Admiralty’s facilities were shipbuilding workshops. It was the Admiralty where the origin of the Russian Navy began, as well as development Russia’s seaport.

The golden dome of the wonderful St. Isaac’s Cathedral can be seen from almost all parts of the city as it is the second historical building of St Petersburg after the Peter and Paul Cathedral. From a viewing plarform on the dome drum you can see a stunning panorama of St. Petersburg.

We are going to the Vasilyevsky island to see the famous ensemble of the Spit of Vasilyevsky island. Peter the Great decided to make it a cultural and administrative centre of the city. From this spot you will see the Peter and Paul Fortress, the majestic Palace Embankment, the Admiralty spire, the dome of St. Isaac’s.

We will finish our city tour at the unique historical and architectural monument of St. Petersburg, the Peter and Paul Fortress. It is linked to both the history of the city and to the Romanov dynasty, as it is home to the graves of nearly all the rulers of Russia since Peter the Great.

A day tour to Peterhof, Peter the Great’s summer palace, world known for its famous series of golden fountains. We are met by a view of the Upper Garden taking up an area of 15 hectares. It was lain out in the first years of the construction of Peter’s residence and for a long time it remained a kitchen garden: vegetables grew in patches; fish were farmed in three ponds that served as reservoirs for the fountain system. In the second half of the 18th century the Upper Garden acquired the appearance of a regular park and beautiful fountains.

The centerpiece of the whole ensemble is the Grand Palace – Russian emperors ‘crown’ residence. It is located on top of the ridge separating the upper and lower parks and stretches for about 300 m. The Grand Palace represents a symmetrical baroque composition. The interior of the palace poses a myriad of halls such as the Blue Reception Room, the Dance Hall, the White Dining Room and so on. Among the vast rooms, the Oak Study of Peter the Great occupies a special place. Now, the Grand Palace is a unique historical and art museum with the collection of about three and a half thousand items, including paintings, fabrics, furniture as well as personal belongings of the former owners of the Palace.

After visiting the Grand Palace, we will go out onto the terrace overlooking the panorama of the Grand Cascade – the gem of the superb Peterhof fountain system. The Cascade is unique in size, abundance of water, richness of the sculptural adornments.

Coming down along the Grand Cascade we will see the central Samson Fountain – an allegory of the victory in the Great Northern War. At equal distances in the right and left of the Fountain there are the twin Bowl Fountains. Those Fountains are called French (the eastern one) and Italian (the western one). The Bowl Fountains fortify the composition of the gigantic water column of the Samson Fountain.

Let’s go back along the Birch Alley to the Grand Cascade and once again enjoy the magnificence and beauty of the ensemble. Our tour in Peterhof is over, and we are going back to Saint Petersburg.

We will begin the new day by visiting Tsarskoye Selo (Pushkin) – a prominent landmark of the world architecture and landscape design of the 18th – early 20th century. On the territory of the Catherine and Alexander Parks having a total area of 300 hectares there are over a hundred architectural structures: from magnificent palaces and marble monuments to numerous pavilions, bridges that create a unique aura in the parks.

The centerpiece of the ensemble is the Great Palace (Catherine Palace) – a splendid specimen of the Russian Baroque. The Great Hall, ceremonial chambers including the world-famous Amber Room astound with their luxurious decoration. The Amber Room is a famous masterpiece of the 18th century art. The gem of Russian Emperors’ summer residence was created by German craftsmen and gifted to Peter the Great. The Amber Room disappeared without a trace during the WWII. In 2003 the Amber room was fully recreated and is currently available for viewing in the Catherine Palace.

The rest of the day we dedicate to Hermitage museum, the city’s most visited museum, every year over three million visitors become acquainted with the extraordinary collections. Over three million exhibits are housed in the State Hermitage Museum complex buildings. Here you see the royal apartments of the Winter Palace, the Malachite Room and the famous of world art that focuses on European painting from the middle ages to the 20th century, including Da Vinci, Rembrandt, Picasso, Renoir.

Your journey comes to an end as you are transferred to the airport.